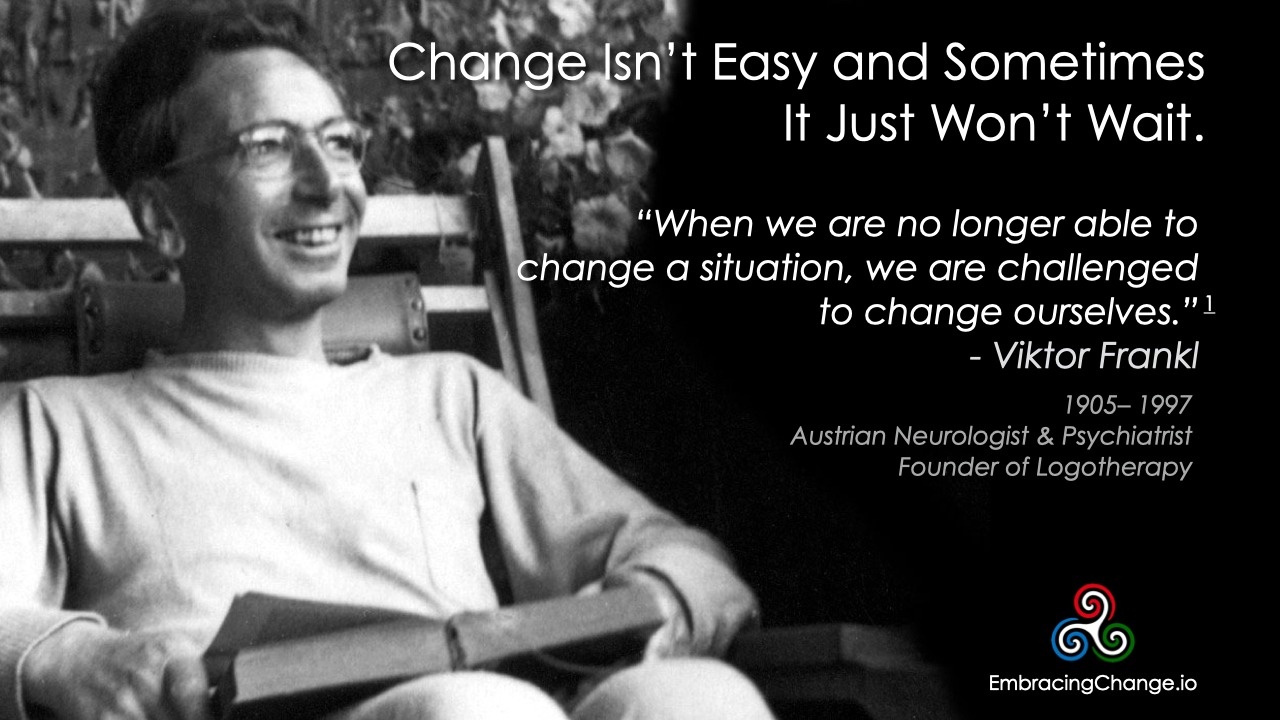 In researching this post, Brain and I discovered something called, “logotherapy”. It’s a form of psychotherapy and its premise is the idea that humankind’s greatest motivation, and our greatest task, is our search for meaning2. The man who developed it, Dr. Viktor Frankl, did so from a place of unimaginable suffering.

Dr. Frankl, his story and his concept have had a huge influence on me personally and have influenced this passage as well. I never physically met him because he died in 1997 but his words have truly inspired me. I think his story may move and inspire you as well so I’d like to share a bit of it with you as it relates to our time together here today.

Viktor was born in 1905 in Vienna into a Jewish family of civil servants. He was fortunate in that at an early age he became interested in psychology. It was the beginning of his life’s work and purpose. He studied at the University of Vienna where he specialized in neurology and psychiatry, specifically on the topics of depression and suicide. In the years to follow, he developed suicide prevention programs that helped thousands of teenagers and women.3

In 1942, Dr.  Frankl was 37 years old and World War II was raging. That year was the beginning of his personal journey to hell. He and his entire family were deported to Occupied Czechoslovakia and placed in a Nazi Ghetto that housed many of the Jewish middle class. Over the course of the next three years, he and his family would endure all the atrocities that were life in Nazi concentration camps, including the infamous Auschwitz death camp in occupied Poland. When it was all said and done, his father died of pneumonia and his wife, brother and mother were all murdered by the Nazi regime. Against all odds, he was the lone survivor.

After the war, he returned to Vienna and in 1946 wrote a book; the translated title, "Saying Yes to Life in Spite of Everything: A Psychologist Experiences the Concentration Camp".

The book has since sold over twelve-million copies and is still a best seller. It’s now sold under the title, “Man's Search for Meaning”. I highly recommend it.

As the original title suggests, the book tells the story of how he survived the Holocaust by finding personal meaning in the experience, which gave him the will to live through it.

Just the thought of writing his book is what kept Dr. Frankl alive, what kept him going as he endured his three years in the Nazi camps. In many ways, the book and the ideas contained between the front and back covers are truly a miracle.

While Dr. Frankl wrote the book a long time ago under these completely different circumstances, I find that much of what he wrote relates directly to our conversation here. As such, I have incorporated a number of its themes throughout this book.

I’d like to share a brief excerpt from the book. In it, Dr. Frankl writes, “Everything can be taken from a person but one thing - the last of the human freedoms - to choose one’s attitude in any given set of circumstances, to choose one’s own way.”4

He then goes on to say this about his imprisonment, “There were always choices to make. Every day, every hour, offered the opportunity to make a decision, a decision which determined whether you would or would not submit to those powers which threatened to rob you of your very self.” 5

He also points out, “The sort of person the prisoner became was the result of an inner decision.” 6

He wrote this from a place of unimaginable horror and yet he uses the word opportunity. In my mind, that’s truly an inspirational thought and I believe it applies to each and every one of us.

The decisions he speaks of are the choices the prisoners made.  To escape the present, they had the choice of either looking forward, to the future or looking back, to the past.

Dr. Frankl himself found inner strength by choosing to focus on the future – to the goal he had – to write his book. When he was initially brought into the camp, he came with a handwritten manuscript hidden under his coat. It was the first draft of the book he intended to write. As I’m sure you can imagine, the guards destroyed it upon his arrival. His goal from that moment on was to begin again and complete his book. In doing so, he imagined himself speaking to university students, teaching the ideas contained in that yet to be written book.

A handful of other prisoners also found something to live for – their own individual purpose that they too recognized would only be fulfilled if they were to survive. Those thoughts gave them hope and provided meaning to their lives and their suffering. Many times, those thoughts were difficult to hold on to and Dr. Frankl and the others had to force their minds to the task.

Unfortunately, many others were only able to look toward the past – to the way things once were. To the lives they used to lead. That sounds logical and reasonable but there was danger in that way of thinking. While choosing to look to the past made the horrors of the present feel less real, it also created a void that would ultimately lead to a psychological decline – a decline that was created by a lack of meaningfulness in their lives. As Dr. Frankl put it, “The prisoner who had lost faith in the future – his future - was doomed.”7

What this illustrates is the fact that striving to find meaning in one’s life is our primary motivational force. What Dr. Frankl concludes is that the meaning of life can be found in every moment of living; that life never ceases to have meaning, even in suffering and death.

I’m not sharing this to bring you down. I’m sharing this so that you may begin to understand that, no matter what our circumstances, there are really only two things in life we can control.

Our actions and our attitude.

Let’s do a 180 now and talk about happiness for a moment.

Unlike when we’re in survival mode and have the option of looking either to the past or the future to psychologically escape a grim reality as Dr. Frankl did, happiness is something that only happens in the present.

By way of example, maybe you’re happy right now because you’re learning, you’re engaged, and you’re fully present. If you feel the joy and happiness of this moment or any other moment today, tomorrow or beyond, and you find yourself thinking, “This is awesome!” “I’m so happy!” I can guarantee you that it’s because you are not, at that moment, thinking about the past, or the future.

So what is happiness exactly?

To help me answer that question, let me introduce you to another outstanding individual, Mo Gawdat. He is the author of another wonderful book, “Solve for Happy”. In it, he tells us the answer to what is happiness?

“Happiness is the absence of unhappiness.”8

Duh. Ok then. That’s easy. Problem solved. We can all take the rest of the day off and be happy.

But seriously, think about it. When are we not happy?

We’re not happy at that moment because we’re not living in the present. We’re either projecting forward or back.

The good news is, as Mo goes on to say, that happiness is our default state. If you don’t believe it, hang out with a human who is, as he says, “fresh from the factory”. In other words, an infant or a toddler.

Let’s do a quick thought experiment to prove it. Mo shares this in his book so I’m going to borrow it. I apologize in advance for putting you through this - but it will be worth it, I promise.

What does this prove? It proves that it’s not the event that made us unhappy, it’s thinking about it. So whether we’re ruminating about something from the past or feeling anxious about what we have to do tomorrow, we rob ourselves of the moment. We cheat yourself out of the opportunity to be happy.

And viola, you’re back in the present where the unhappiness disappears and the opportunity for happiness appears.

Interestingly enough, both books, Viktor Frankl’s “Man's Search for Meaning” and Mo Gawdat’s book “Solve for Happy” were motivated by extraordinarily bad circumstances that could have resulted in lifelong misery. Mo lost his 21 year old son from unforeseen consequences stemming from a routine surgery and we know Dr. Frankl’s stemmed from life in a concentration camp. These events inspired these men to write their books. The moral of these stories is to remember and appreciate we have an innate freedom of choice – we’re all free to choose our attitude and are free to choose how we act - and how we react.

This post is based on a chapter from my book entitled, “Embracing Change: Your Go-To Guide To Your Desired Future”. If you enjoyed this and are interested in seeing more “change for the better” content please visit my website rudypoe.com.